The rhetoric of hate speech

How we relate to each other and how we represent, label and portray others is important.

The use of ‘othering’ language reinforces divisions and acrimony between groups by asserting irreconcilable differences between in-groups and out-groups. In contrast, language that emphasises our common humanity and interests reinforces social cohesion and a sense of shared concerns and universal rights.

Some of the main forms of hate speech are vilification, dehumanisation, demonisation, incitement, toxic misinformation, stereotyping and genocide denial.

Hate speech can be expressed in explicitly inflammatory and violent terms using words such as kill or hate but also may be free of explicitly hateful words while still functioning to distance or isolate others.

It is important to remember that target groups may be on the receiving end of hate speech every day. This video produced by the Stop Funding Hate campaign examines how it feels to be the target of relentless hate speech.

Vilification is behaviour or speech acts that incite hatred, serious contempt or severe ridicule of a person or group of people because of their race or religion. Vilification is against the law.

Behaviour that could be seen as vilification includes:

It is also against the law to give permission or help someone to vilify others.

Racial Vilification Law in Australia outlines how racial hatred is defined under the Racial Discrimination Act 1975 and provides an overview of the complaints process of the Australian Human Rights Commission (AHRC). It also briefly outlines relevant state and territory provisions on racial vilification, including criminal sanctions.

Any act or idea that treats some people as less than human is an act of dehumanisation. Dehumanising metaphors play a crucial role in racist propaganda by identifying different groups of people as less or other than human. 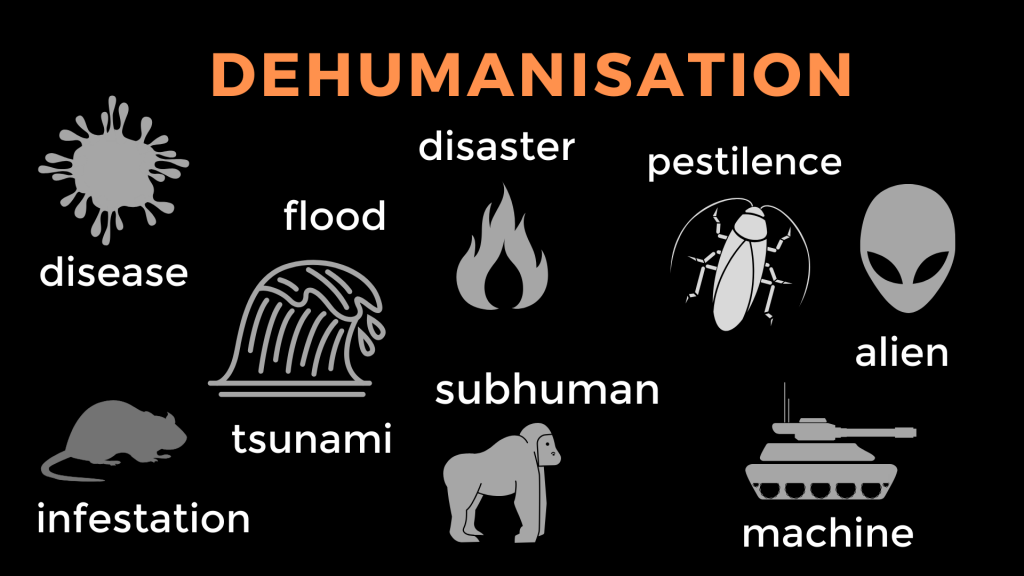 Metaphors are powerful because they are able to create new links in our minds whereby the qualities of one thing or action become connected to another.

This video produced by the organisation Faith matters looks at dehumanising language and how it impacts on communities.

A metaphor can completely alter what we perceive, how we think and what we feel and do. The metaphors prevalent in racist discourse often attach non-human qualities, attributes and behaviours to people while at the same time negating their humanity.

The denial of humanity of the targets of hate speech, robs them of their right to compassion and other moral responses, and the target may suffer violence as a result. Dehumanising metaphors evoke hostility, disdain, loathing, physical disgust, and even bodily fear in people. 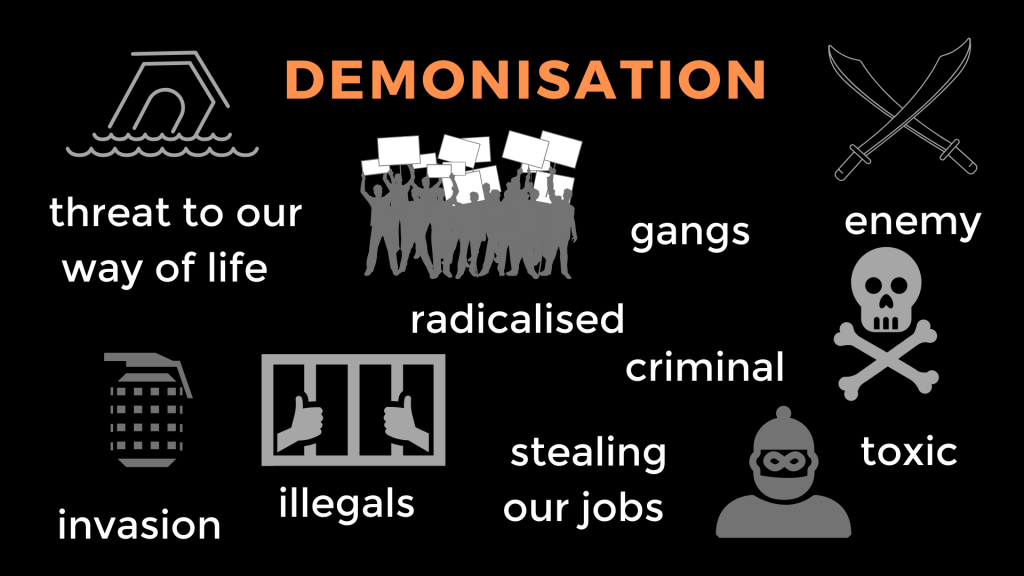 Incitement can be when language or rhetoric is used to incite others to commit acts of violence, intimidation, hostility or discrimination. Incitement can extend to include provocation to terrorism and atrocity crimes.

Toxic misinformation is the dissemination of disinformation, false stories and news, linking the target group to violent, criminal or morally corrupt behaviour.

This includes unbalanced, sensationalist and untrue reporting in relation to Aboriginal people, ethnic minorities, immigrants and/or asylum seekers. For example misinformation in flyers circulated during the 2019 Australian Federal election malign Senator Anne Aly by drawing on race-based hatred and fear.

Negative stereotyping is when all members of a group are viewed as sharing the same negative characteristics. When we stereotype people based on race, we don’t take into account individual differences. Racial stereotypes are reproduced in traditional media and in a range of new media including social media, music videos and games.

Kudzai Chirunga in his rap song 4 Deep In The Suburbs looks at the impacts of negative stereotypes on young African Australians.

Genocide denial is the denial and or minimisation of the scale and severity of an incidence of genocide and can be seen as the final stage of a genocidal process.

By denying the collective memories of the victim group, its history is erased and the cuplbabilty of the perpetrators goes unacknowledged.

Similarly, truth telling is an important step in the process of reconciliation.
In Australia the lack of a shared understanding of history is a source of ongoing trauma for many first Australians and a barrier to reconciliation.