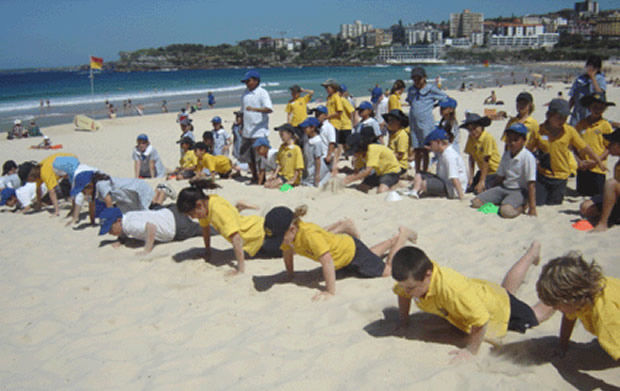 Bondi Beach and Granville South Public Schools have embarked on an ‘Exchange and Change’ project that provides students with a chance to better understand the diversity of Sydney.

When you hear Bondi Beach and Granville South, you think of two very different places. Granville South Public School has a multicultural student population with 80% of enrolments from language backgrounds other than English. It is located in south western Sydney. About a quarter of the students at Bondi Beach Public School in Sydney’s eastern suburbs come from language backgrounds other than English.

Before the program began

Before the cultural exchange program began at Bondi Beach and Granville South Public Schools, all that students from Granville South knew about Bondi was surfers and the TV show Bondi Rescue.

Similarly, Bondi Beach students knew little of Granville. They had no idea where it was and were largely unfamiliar of the diversity of the suburb. In 2007, Bondi Beach Public School conducted a survey as a means of documenting students’ prior cultural knowledge. Survey questions included:

The results of the survey encouraged teachers to consider how they might decipher and dissolve some of these stereotypical images and assist their students to learn more about people from different cultural backgrounds.

On 18th March 2008, Granville South students journeyed to Bondi Beach to meet their pen pals. Students were nervous and excited as they travelled by bus along Parramatta Road and through the city. For some students, it was the first time they had gone beyond Auburn or saw the beach.

On arrival at Bondi Beach Public School, students were was placed into groups for a day of fun and exciting activities which included recess in the park; a sand sculpture competition (which resulted in the creation of many castles, mermaids, turtles and even a huge, but very rare pentapus – an octopus with 5 tentacles); beach races; a swim and a party lunch.

At the end of the day, Granville South students headed home exhausted with a fantastic mural to hang up in the school hall.

On Harmony Day, it was Bondi Beach’s turn to visit Granville South. Year 4 students from Bondi Beach and their pen pals from Granville South all wore orange to celebrate the day. After much initial excitement, students from the two schools enjoyed a drum performance from The Rhythm Hunters at the whole school assembly, a barbecue lunch and a game of soccer.

The day provided students an opportunity to cement their friendships with their pen pals and gain more understanding of each others cultures.

What the students said:

Our pen pals have given us the opportunity to take part in a cultural exchange and have helped us learn about the different cultural lifestyles.
-Jasmine and Kenya<c/ite>

On Harmony Day, I liked the music. It was very interesting and a lot of fun. The playground was a lot bigger than I expected and there were a lot of hand ball courts.
– Howard

The Harmony Day was great and the barbecue was fantastic too.
-Tess

What the teachers said:

All stakeholders involved have discovered that Bondi Beach and Granville South have more in common than what first meets the eye. Students, teachers and parents have developed their knowledge of Australia’s multicultural society, investigating cultural identities through pen pals, with the program presenting many opportunities to break down and understand stereotypes associated with different cultures.